My work aims at predicting the effects of biodiversity loss and other global changes on ecosystem functioning. I generate theoretical predictions of ecosystem functioning depending on component species, their diversity, their ecological interactions, as well as their evolutionary dynamics.

With global changes, ecosystem functioning might become less predictable. Several experiments have shown that biodiversity enhances the temporal stability of vegetation biomass. Stability is a key aspect of ecosystem services. I am developing a theory that fosters our understanding of the mechanisms through which biodiversity stabilises communities, to predict community stability from measurable traits of its component species, and that can be applied to experimental and observational data. 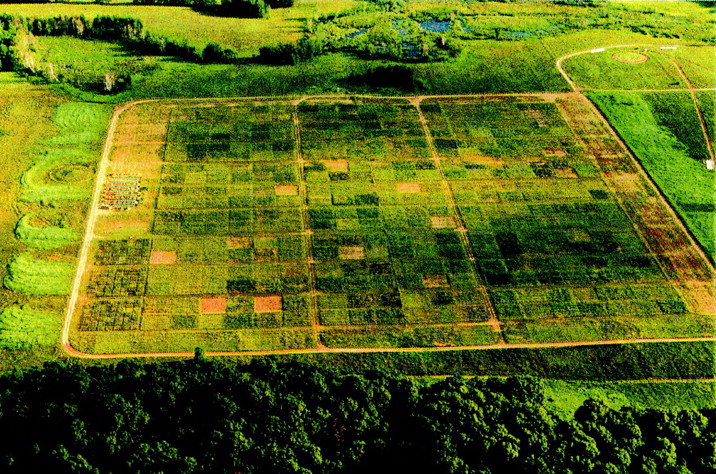 Figure : my theory can be applied to data from large biodiversity experiments such as David Tilman’s in Cedar Creek (Minnesota, USA)

Figure : Integration of sub-disciplines in ecology is a key feature of the theoretical ecology developed in the Centre.

Where do mutualisms come from, how do they evolve?

Do they evolve from exploitative interactions? Could some plants benefit from herbivory? What is a mutualism? In any mutualism, I argue that a benefit can simply be due to evolved dependence, the adaptation to a partner. The organism has evolved a dependence so that it is not able to function without its partner anymore. This could be the case for some plants adapted to herbivory, and is likely to be the case in any mutualistic interaction with a long evolutionary history.

Could some mutualism come from competitive interactions? I developed a theory of the evolution of a trading mutualism for two essential resources, between two competitors, that could apply to plants and their mycorrhizae.

Figure : did the trading mutualism between plants and their mycorrhizae evolve from a competitive interaction? 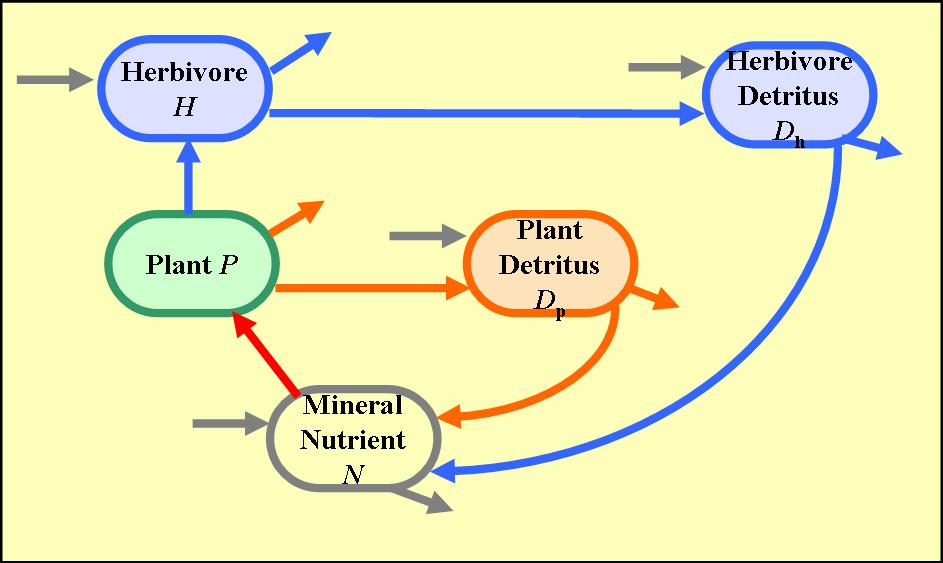 Figure : Simplified ecosystem model representing the cycle of a limiting nutrient such as nitrogen.

Evolutionary dynamics depending on trade-off geometry.

An organism cannot do everything at the same time. This is the basics of trade-offs that enable biodiversity. Trade-offs are really difficult to measure and their shapes are often unknown. I developed a method to evaluate all possible outcomes of evolutionary dynamics for all possible trade-off shapes, when there is a trade-off between two continuous traits.

Mathematica file with codes for figure 3C and 4C of de Mazancourt and Dieckmann (2004). The code was written to be easily used with other equations. Download. 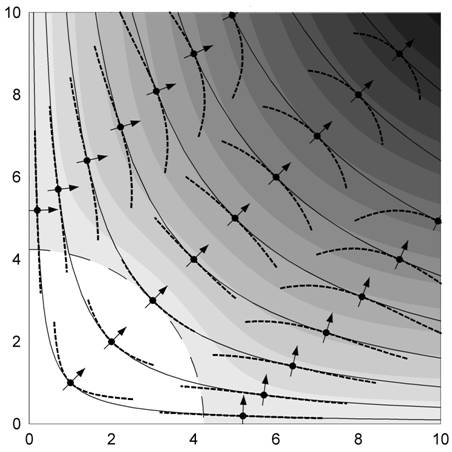 Figure : The evolutionary landscape defines all possible evolutionary outcomes in the space of two continuous traits, where the two traits are constrained by a trade-off of unknown shape.

(2020) - Why do forests respond differently to nitrogen deposition? A modelling approach. - Ecological Modelling 425: 109034

(2019) - Trade-offs in the provisioning and stability of ecosystem services in Agroecosystems. - Ecological Applications 29(2): e01853

(2017) - Delayed behavioural shifts undermine the sustainability of social–ecological systems. - Proceedings of the Royal Society B. 284 : 20171192